Settings Reject All Accept All

The prices are indicative based on a wider geographical region. Please log in to order!

We use cookies to bring you closer to your favorite coffee & food, provide you with tailor-made content, and monitor traffic to our site. See the categories of cookies below and adjust your choices.

We use cookies to bring you closer to your favorite coffee & food, provide you with tailor-made content, and monitor traffic to our site.

Required cookies are required to navigate our site, and in order to use the features provided. Without the use of such cookies, proper functioning of our site is not guaranteed.

These cookies are used to create personalized content, tailor-made for you, to give you the best possible gregory's experience.

Select all the above

The changes were saved successfully!


Gregory’s celebrates 50 years of operation! During these years it has grown and expanded into the Gregory’s it is today. With stores in every neighbourhood it has become part of our everyday lives. Today’s Gregory’s is the sum of the people who have written, and are writing, its story, the moments and events that have made it stronger and equipped it with the know-how and expertise to write with a smile and passion the next pages of its story.


It is in 1972 when Mr. Grigoris Georgatos decides to realise his dream and start his own business. So, he opens a store on Vouliagmenis Avenue, which he names after himself and designs the first company logo single-handedly. A ground-breaking move, at that time, and proof of his entrepreneurship. He combines Gregory’s with the little green man on the traffic light, creating a Gregory’s on the move, already having in mind his target customers.

Grigoris has thought of everything. The only thing he does not know is that this store will go down in history, be associated with the tastiest traditional pies, and become the favourite everyday refuelling spot of the next generations. All thanks to his pies which enclose the secrets of his birthplace, Kefalonia island, and of Constantinople, where his wife Sonia comes from. 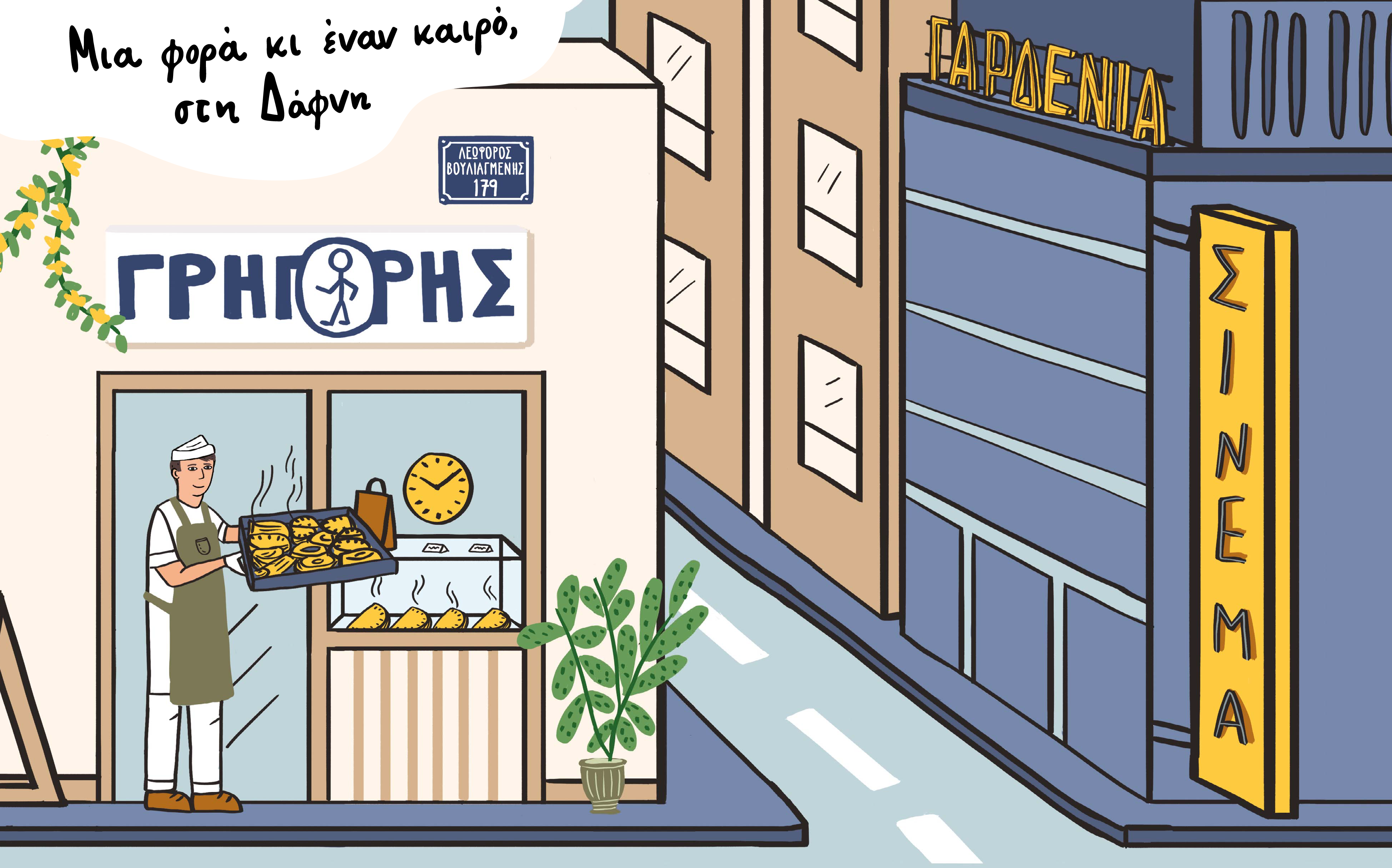 
The second generation, Vlassis & Artemis, take on an active role in running the business and together with Sonia & Grigoris, they envision making Gregory’s great and known to everyone. Gregory’s is their passion since they have lived their whole childhood in the store. They work hard and staff the company, constantly observing & aiming to identify what the consumer would want. And they succeed! In 1991, Vlassis is the first person to discover that Greeks would really love to enjoy a coffee on the go, because they do not always have the time to sit in a café. He buys professional equipment to make espresso-based coffee drinks and launches the take-away service, selling cappuccino, freddo cappuccino and freddo. 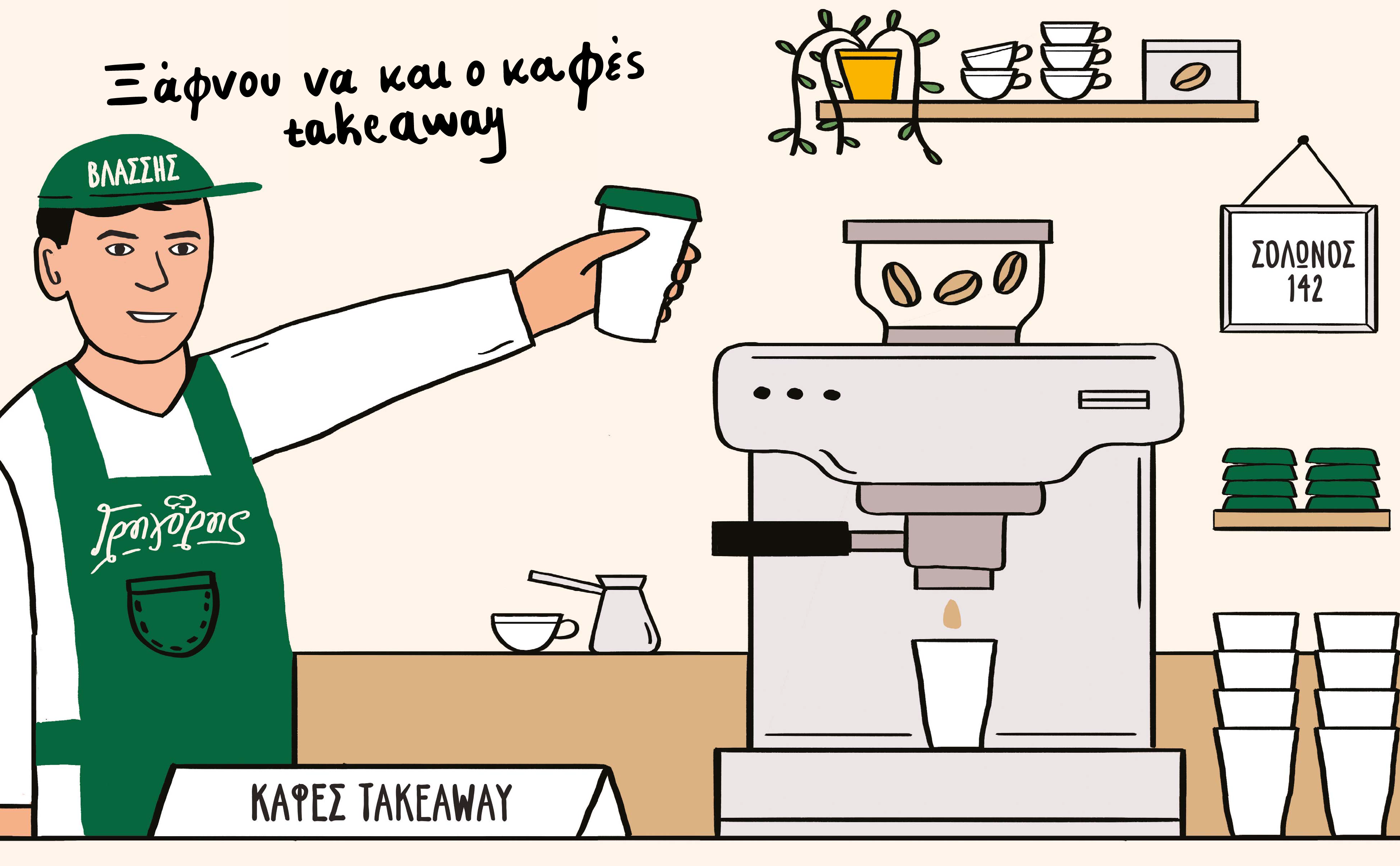 The innovative ideas continue to flow as Vlassis, who is at the same time a student, discovers that young people love sandwiches. He therefore decides to expand the product range offering with the addition of sandwiches. Products that back then were unique, including the mini baguette with poppy seeds, tuna, mayonnaise and lettuce, are an unprecedented success and kick-start the further expansion of this category.

Naturally, Gregory’s attracts even more people, and product demand increases bringing the total number of stores in Attica, by the end of the decade, up to 5.


Vlassis & Artemis continue looking for ways to expand Gregory’s. They realize, early on, that to achieve their goal they will need to change their growth model. So, in 1994, Gregory’s turns to franchising and the first Gregory’s franchise stores make their appearance. This very well thought-out strategic decision, will enable Gregory’s, as “parent company” to support and train its franchisees. They, in turn, will increase the number of staff in the stores, with a view to serving customers in the best possible way. This new model helps Gregory’s to create, together with its partner franchisees, an immensely pleasurable customer experience in all its stores.

In 2000, a significant year since it marks the start of the new millennium, Gregory’s launches a fresh brand identity. This time the logo is accompanied by a new word, which is not even in the dictionary. The word, “micromeals”, which is a perfect description of what the brand has evolved into, was a huge success and became inextricably linked with Gregory’s.

In 2001, striving towards further growth and innovation, a new Gregory’s store opens at Eleftherios Venizelos Airport, thus becoming the only Greek catering company to gain a foothold in the state-of-the-art airport of Attica.

By the end of the decade, Gregory’s counts 90 stores, is expanding rapidly and gaining widespread brand awareness.


This decade brings with it great challenges and upheavals. It begins on an optimistic note when Greece becomes part of the Eurozone and ends with a lengthy financial crisis.

These upheavals are, however, experienced also by Gregory’s, which, at the start of 2002 with a total of 100 stores, is continuing to expand also to other catering-related concepts, through mergers and acquisitions. Being involved in other additional activities, means that the company is increasing its lending, which leads to financial problems. The Georgatos family is quick to grasp the new situation and finds the solution by making difficult, but at the same time necessary, decisions. It changes the management model, establishes procedures & implements a strict recovery plan. And it is worth the effort, because Gregory’s not only swiftly overcomes the crisis but also starts to pick up again, displaying healthy growth. So in 2005, it enters, for the first time, the Cypriot market and by the end of the decade Gregory’s now counts 250 stores.


Having been built on solid foundations, Gregory’s is able to weather the hard years of the crisis and focus on consumer needs. In 2012, it makes a very subversive move “reducing” its coffee prices from €2.30 to €1.30! This action is aimed at showing customers that it is by their side, offering exceptionally low prices so that they can continue to enjoy their coffee every day.

At the same time, in an effort to stand by Greek society that is being challenged by the constant memoranda, Gregory’s engages in corporate social responsibility actions. It cooperates with the NGO “Boroume” offering hundreds of thousands of food portions to charitable organisations. In addition, in 2015, it creates the programme “Mid-morning snacks for schools”, through which it provides school meals to thousands of pupils in Attica region.

Alongside this, it is also rapidly expanding abroad. It is entering new markets such as Germany & Romania and consolidating its position with an increasing number of stores in Cyprus. Whatever country Gregory’s arrives in, it always receives the warmest welcome.

Gregory’s has now grown so much that it no longer symbolizes only coffee and a cheese pie, but the total experience, optimism and a warm smile. This is why in 2016 it decides to revamp its logo and corporate identity. Its new brand image is fresh, pure, hand-made, direct, human-driven and minimal. It exudes confidence. Just like Gregory’s itself!

But Gregory’s restlessness does not stop here. Seeing the growth and power of technology, it starts investing early on in the digital transformation of the company. It launches a mobile & web application for online orders using delivery service, and creates a cutting-edge e-learning method to train store staff in real time

Ready to grasp the future, in 2021, Gregory’s launches a striking new store design to signal the start of a new era. With clean lines, vibrant colours & inspired messages, the new Gregory’s store keeps all its values intact, including its Passion, Creativity, Top Quality, Responsibility, Warm Smile, and enhances the customer experience. 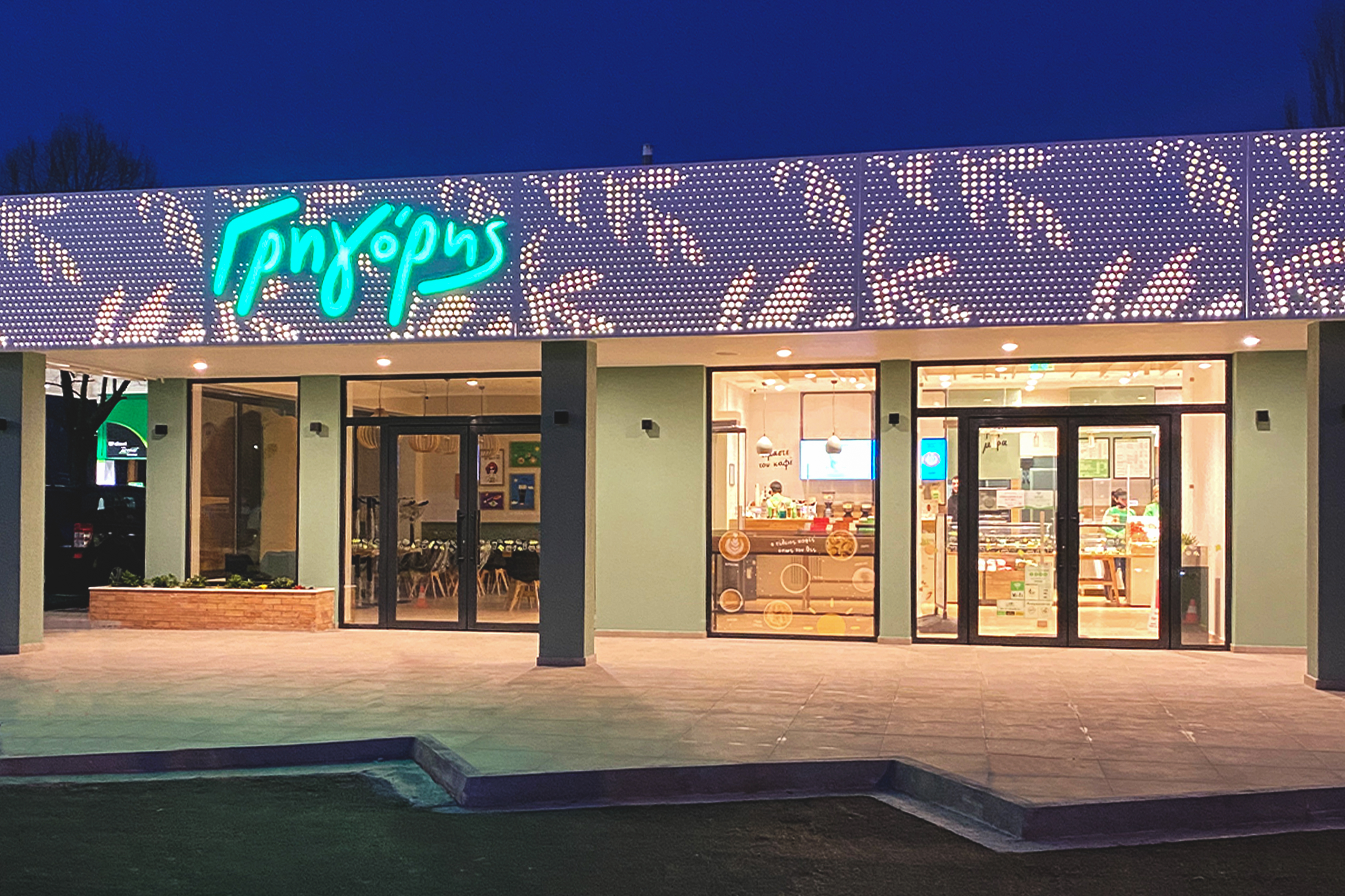 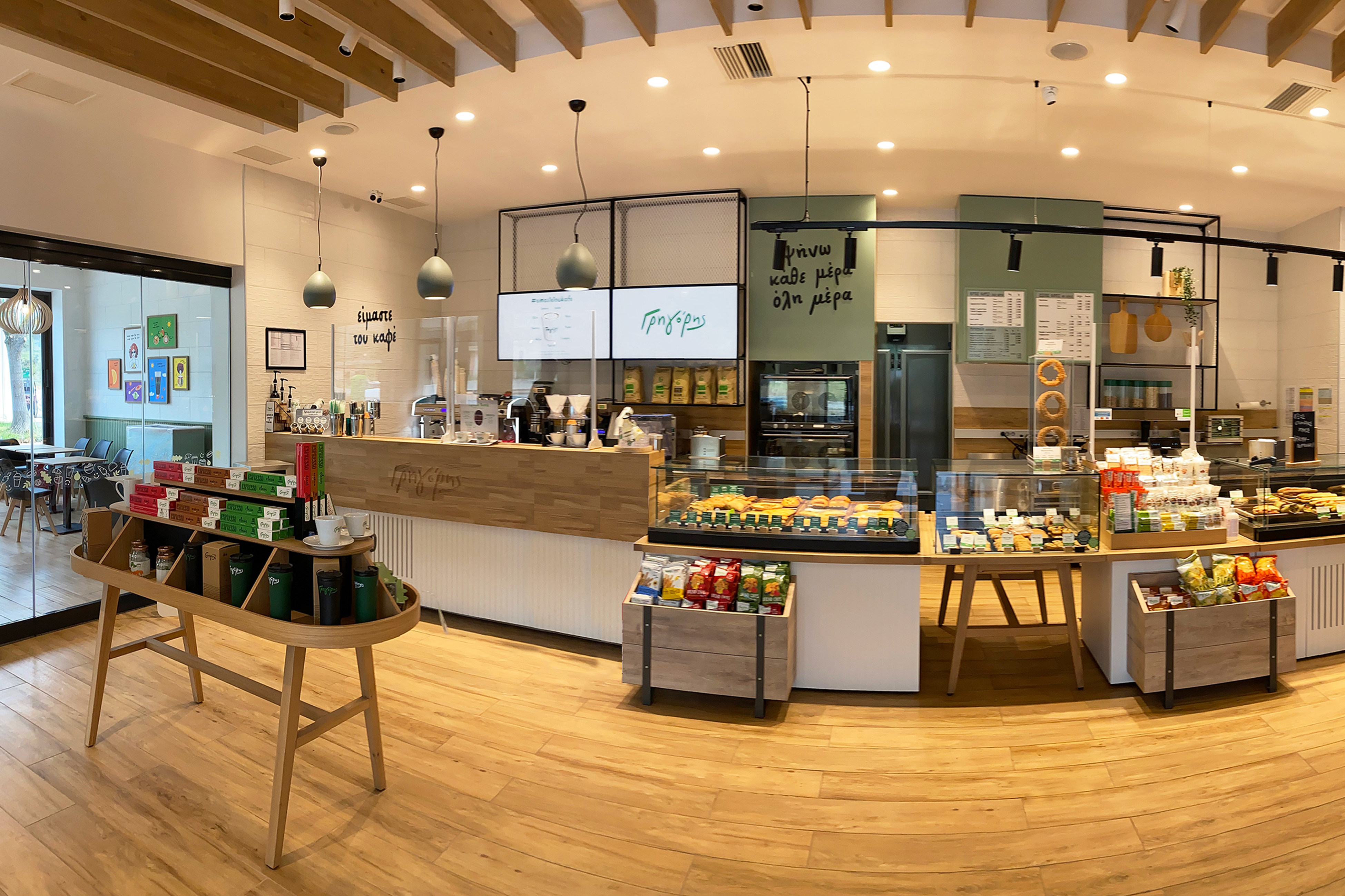 ΣOn the threshold of its 50 years of operation, Gregory’s currently has more than 370 stores in Greece and in major European cities, which are visited by over 250,000 customers every day.

Today, in Gregory’s stores, customers can enjoy what they are looking for… something to brighten up their day: coffee, beverages, juices, pies, salads, pastries, vegan & wellbeing options. All freshly made with a whole lot of love & passion and served with a warm hospitable smile.

This is precisely Gregory’s vision for the future. To continue with the same values and in the same direction. With the same respect for the worker, partner, consumer and society. With the same passion, enthusiasm and dedication, offering consumers the very best products and the warmest hospitality.

Please complete the fields below and select Login to see the menu and order.